I have been away from the blog sphere since July due to some traveling around a little bit, here….

Dahlias and Rudbekias at the Jardin des Tuileries, Paris

But finally I’m now back in my own garden for the lovely month of September. 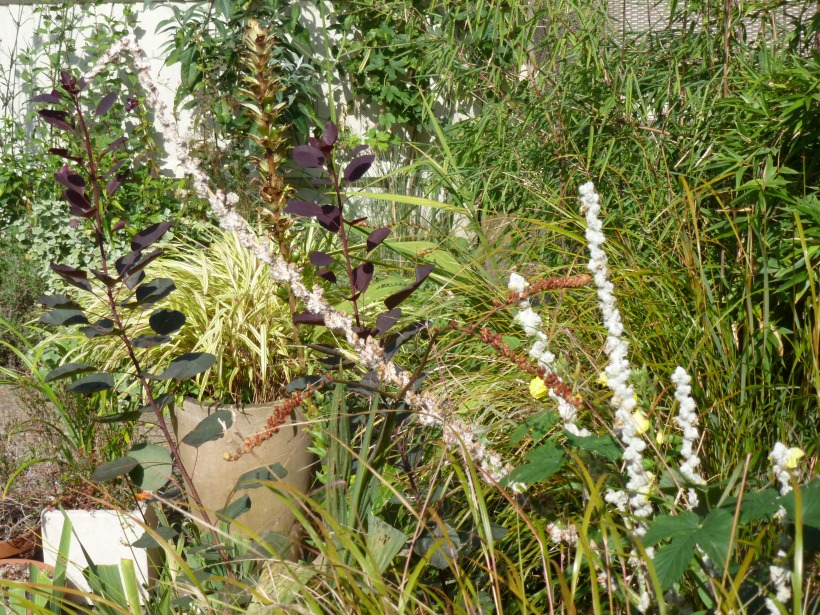 So, this post is very overdue, but it’s a nice contrast to July, because now we have all the beauty of a proper Indian summer, as promised by the weather people – lovely low sunshine, a still and mellow atmosphere with not too much wind and rain, and just a slow slip into the decline of October and November, but not before one last sultry burst of colour, with hazy oranges, reds and burnished yellows having  their last glorious moment.

and now rather beautiful in seed-popping decline, as seen here.

Quinces are, of course, one of the big stars of September – and my tree (Cydonia oblonga ‘Vranga’)  is finally coming into its own, four years after planting, with a bumper crop of glowing yellow fruits.  This is a great tree for a small City garden – lovely single, blush pink, rose-like spring flowers,  wonderful fruits, and eccentric straggly branch growth that is endearingly ramshackle. 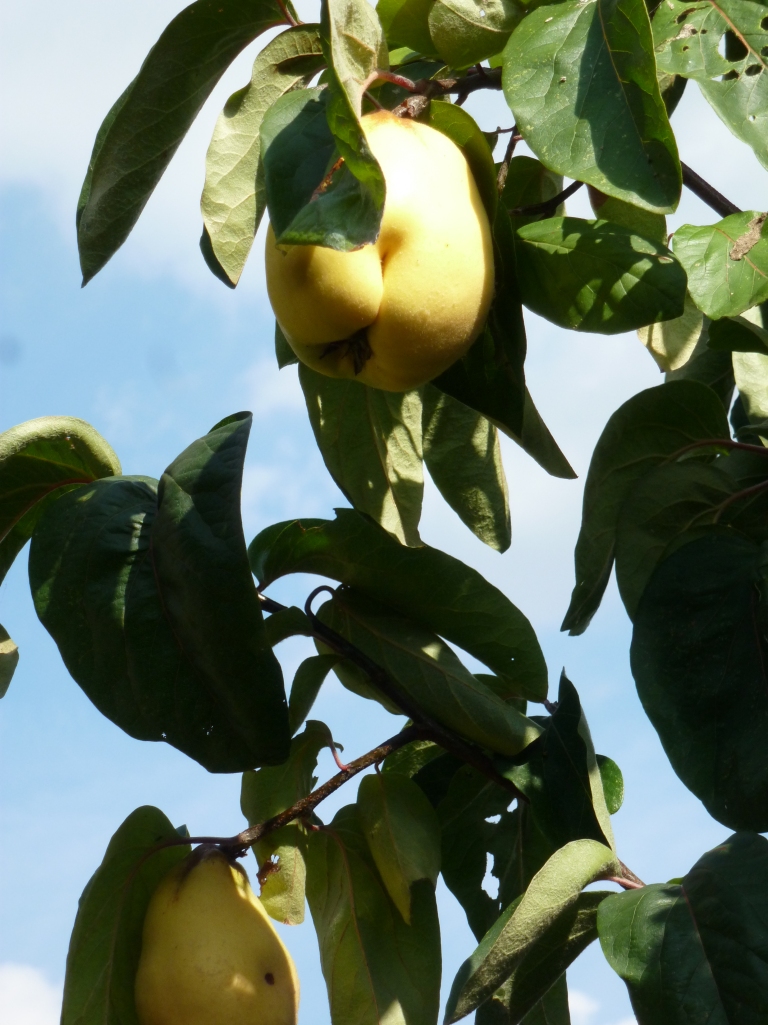 The fig tree is also looking sumptuous this year – its leaves very lush and healthy, with a huge crop of figs, though sadly not quite ripening enough in time to be edible this year.  A few years back I replanted the tree and restricted its root growth by placing several large bricks around the roots – it likes to feel really hemmed in to really ‘get going’ and be happy.  It’s done the trick.

Cotinus coggygria  is another great plant for autumn – mine is ‘Dusky Maiden’ and it is living up to its name, sitting happily with other plants and tinting up beautifully without clashing.

Oenothera, (evening primrose), are new to me this year and they have delivered some beautiful yellows of buttercup perfection this autumn, which I’m very pleased with.

Then, along side all these lovely fiery colours, there are the seed heads that are to be admired at this time of year – the top of the list being the space-age ones of Phlomis. 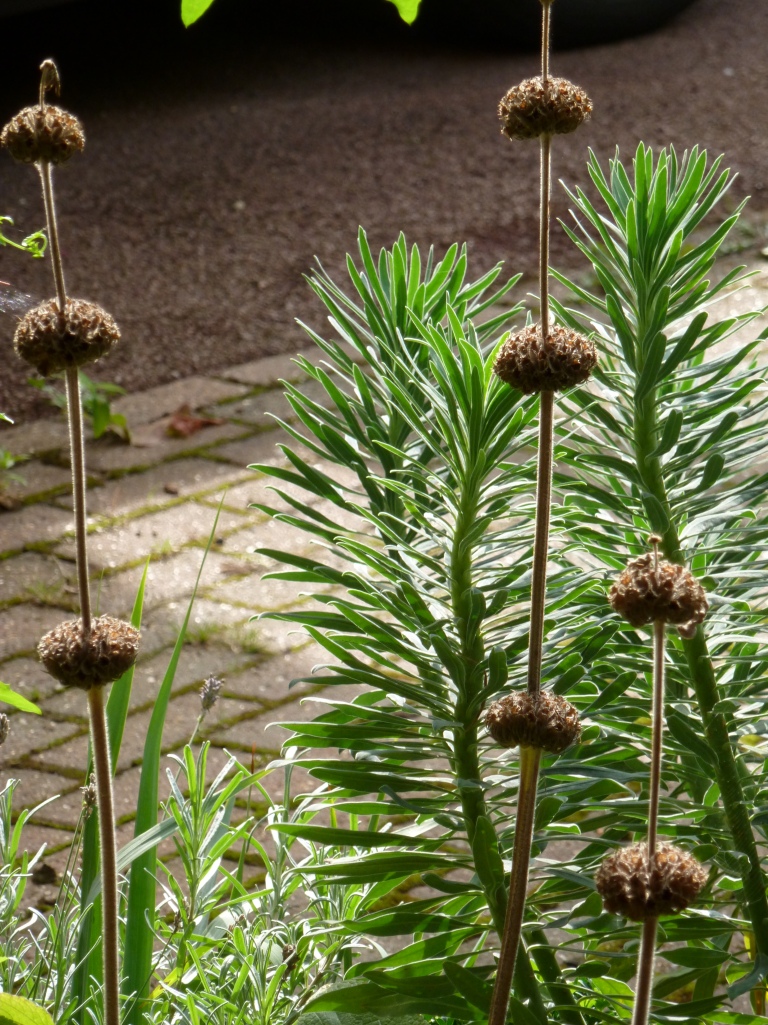 And the seedpods of Acanthus are robust and beautiful too.

And the wonderful bushy grown of Miscanthus sinensis, the seed heads of which will stay around until February next year for some fabulous winter skeleton architecture.

This is a good time to cut back bearded irises so that they do not suffer wind rock, and the rhizomes have the maximum exposure to sun light and a good ‘baking’ now and in May next year. 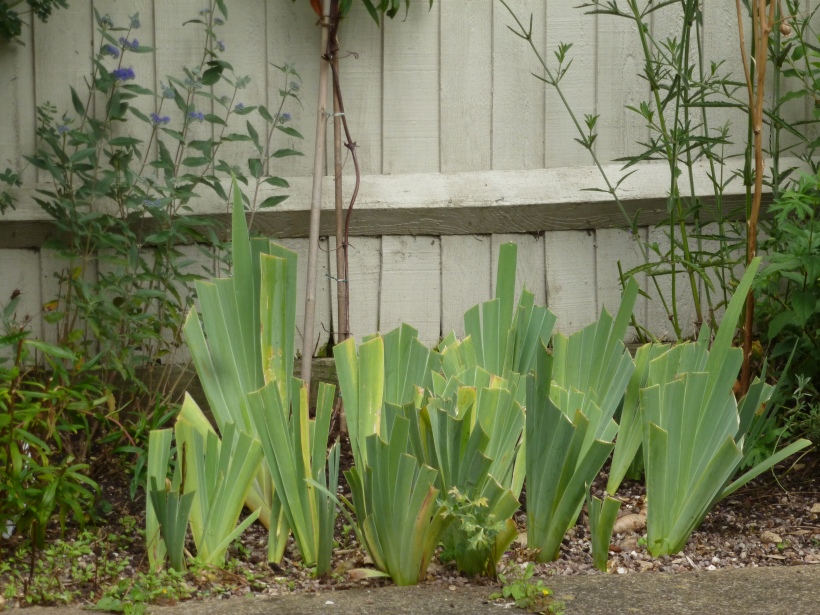 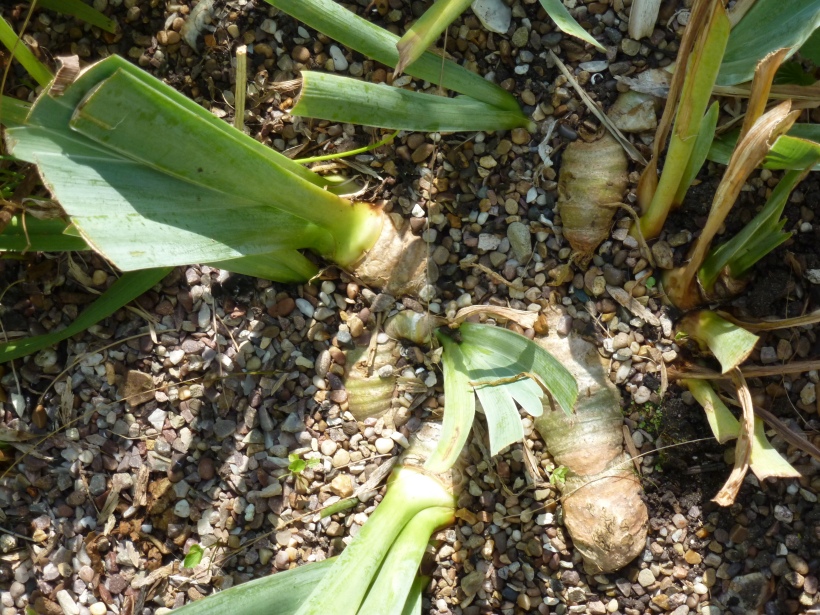 Amongst all the hotter colours of autumn, there are also some wonderful pinks which make a quiet appearance in my garden at this moment in time, particularly an unusual climber, (more often known as a house plant, but perfectly hardy in my garden, surviving many very hard winters) the ‘porcelain berry’ (Ampelopsis brevipedunculata ‘Elegans’).  The leaves are very striking combined with the delicate pink of the stems.  If the birds leave them it is possible to see the tiny berries (just appearing here) turn a striking metallic purple-blue.

Erigeron karvinskianus ‘Profusion’ (Mexican daisy) is also wonderfully pink, as well as white, at this time of year, and is a stalwart plant flowering endlessly for all of the spring and summer and demanding nothing at all. 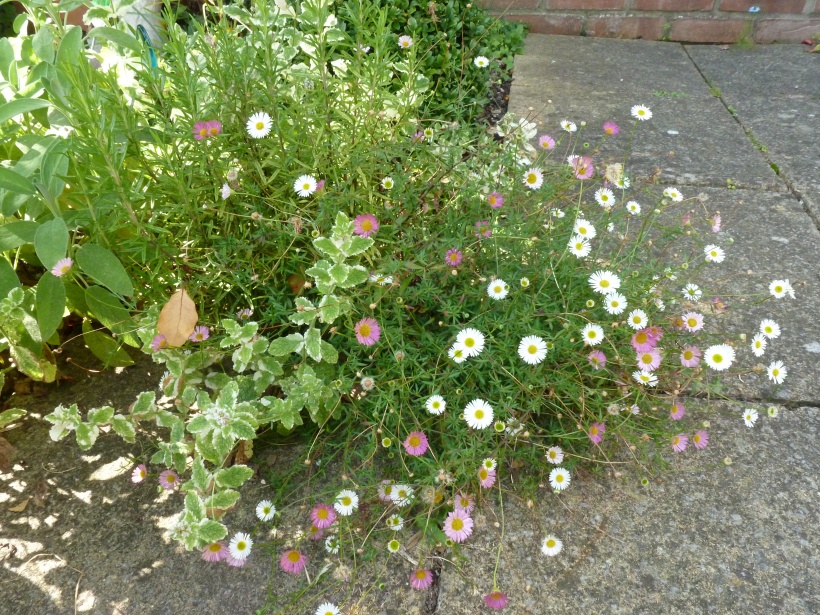 And let us not forget the incongruous jewel pinks of Nerines in September. I have never grown Nerines before, although I have often admired great clumps of them near my house – this year I finally got around to planting some.  Sadly, I had to move them to a better spot, so I think true settling in will take until at least next Autumn, but still I have one flower – hurrah!  The photograph doesn’t quite capture the true bubble-gum pink of the flower.

Blues are much rarer at this time of year, but I have two new ones in my garden this year which I am very pleased with.

The first is Liriope muscari, a grass-like, low-growing, evergreen perennial, that produces these rather spectacular small lavender-blue flowers in September that look from high above like little jewellery beads on a stick, but on closer inspection are tiny flowers. 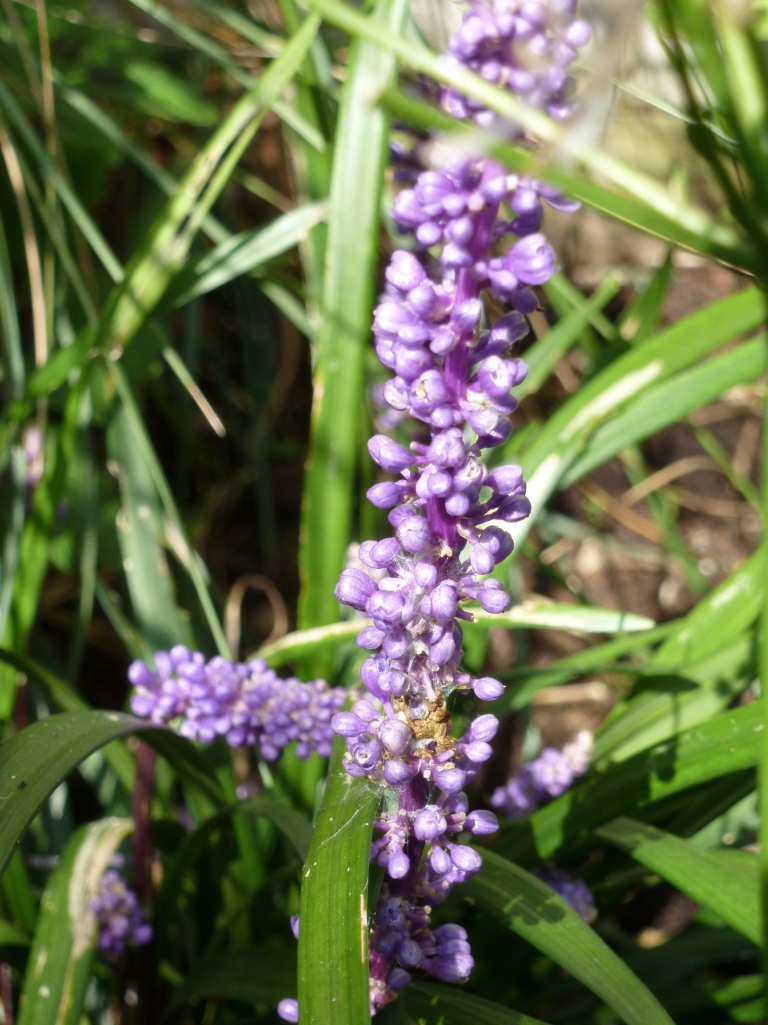 And the other blue star at the moment is Caryopteris x clandonensis ‘Dark Knight’, which I planted last autumn, after not growing this shrub for many years.  This is a rather triumphant blue that has a powdery quality that sits well with the other autumn hues, and I am very pleased with it.

My Rosa Mutabilis is still flowering happily, after many months, its flowers starting yellow, then pink, then slowly turning to coppery pink. 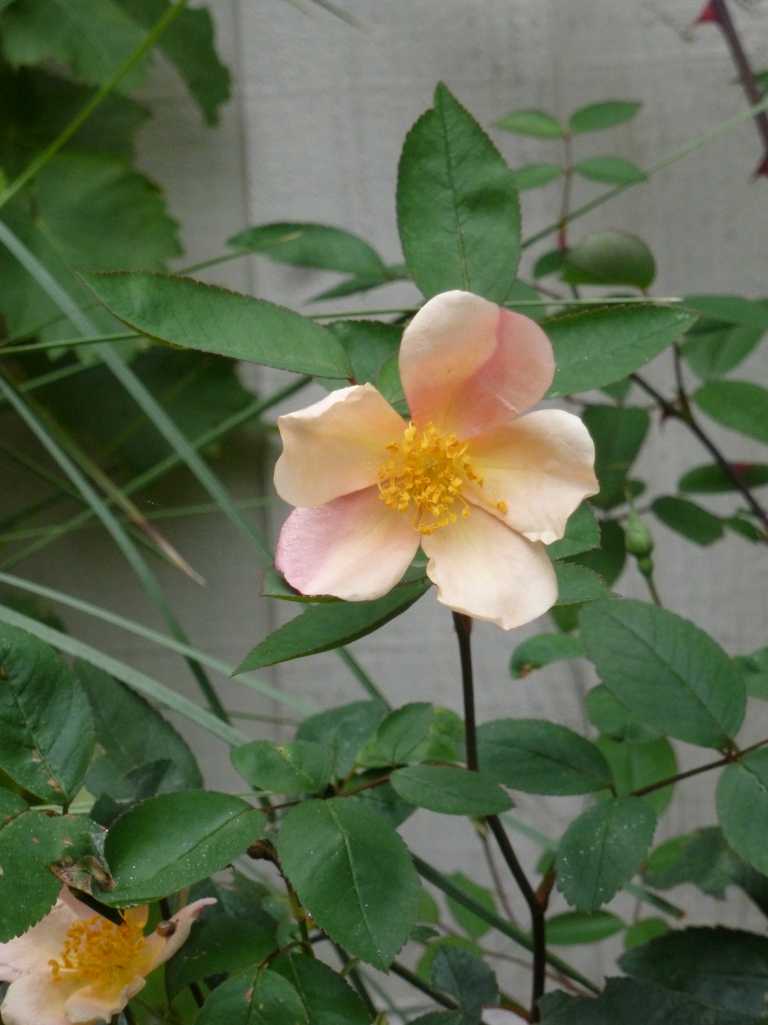 And  last but not least, no gardener can fail to spot all the spiders busily at work at this time of year, their webs a work of genius engineering and painstaking labour.  This lovely garden spider had woven her web across the entire width of my garden outside my french windows – I just missed bumping into it by a hair’s breadth!

Happy gardening to you all until next month.

a year of creative development

Ideas from a Suffolk garden

Creating my own garden of the Hesperides

The incredibly true misadventures of a home gardener.

Out of my shed
Beangenie

an optimist's garden in Wales